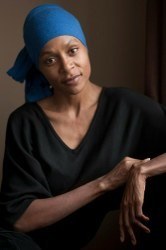 Born in France to Caribbean parents, Dr. Fabienne Kanor teaches French and Francophone Literature and Cinema. An award-winning writer and filmmaker, she has directed many movies (mostly documentaries) and published seven novels, including among others D'eaux Douces (2004), Humus (2006), and Je ne suis pas un homme qui pleure (2016). Set in Louisiana, her next novel tells the story of a Cameroonian man in search of his identity (2020).