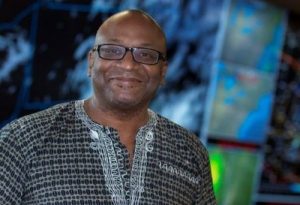 Gregory Jenkins is a native of Philadelphia and is currently a professor in the Department of Meteorology at Penn State University and director of the Alliance for Education, Sciences, Engineering and Development in Africa (AESEDA) in the office of global programs. He received his BS in Physics from Lincoln University and his MS and PhD degrees in Atmospheric and Space Sciences from the University of Michigan. After receiving his PhD he spent 2 years at the National Center for Atmospheric Research in Boulder Colorado as a post-doc fellow. In 1996, Dr. Jenkins joined the faculty at Penn State University in the department of Meteorology and joined Howard University in the department of Physics and Astronomy and the Howard University Program in Atmospheric Sciences (HUPAS) in 2003. He was the director of HUPAS from 2004-2007 and chair of the department of physics and astronomy from 2007 through 2010. He was a recipient of the NSF Career award and was selected as a Fulbright Senior Research Fellow in 2003/2004. Dr. Jenkins has taken part in NASA African Monsoon Multidisciplinary Analysis field campaign in Cape Verde and Senegal. He has published in numerous journals and is the recipient of the 2007 Alumni merit Award from the AOSS department in the College of Engineering at the University of Michigan. He is member of the HistoryMakers and was named a fellow of the American Meteorological Society in 2014.