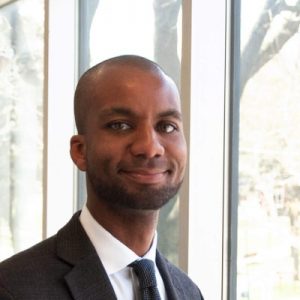 I am an historian of modern Sudan, with special focus on race and religion as political technologies. My first book, Chosen Peoples: Christianity and Political Imagination in South Sudan (Duke University Press, 2021), explores the ways that Southern Sudanese intellectuals used Judeo-Christian Scriptures to frame their revolutionary work against the Sudanese state. Named a Finalist for Christianity Today’s Book Award in History/Biography, Chosen Peoples was also listed in The Christian Century as one of Philip Jenkins’s picks for “best books of the year on Global Christianity.”

My second book, Bounds of Blackness: African Americans, Sudan, and the Politics of Solidarity, is under contract with Cornell University Press. Expanding on my recent work on the Tuskegee Institute’s cotton-cultivation labor in early twentieth-century Sudan, it aims to chart a new intellectual history of black America’s relationship with Africa from colonialism to the twenty-first century. Bounds of Blackness will be included in Cornell University Press’s series on “The United States in the World.”